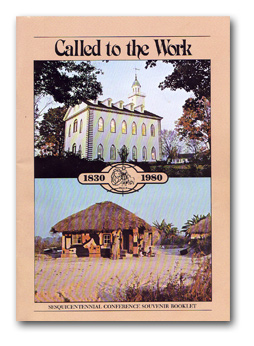 I’m just back from a week in Independence. One of the things I picked up there was an old 1980 souvenir booklet from the sesquicentennial of the church (bought from the Temple Library for 25¢). As we’re approaching another sesquicentennial — the first was 150 years since the organization of the church, next year is 150 years since its reorganization — I was eager to see how the last one was commemorated.

This 48-page booklet, entitled Called to the Work, is a concise summary of the church in 1980. The photos of church leaders were the first thing that jumped out at me. These headshots take up 14 of the total pages. But out of 237 pictured leaders, there was only a single woman: Marjorie Troeh, who was a “staff executive” and “Commissioner of the Women’s Ministries Commission.” It’s incredible how recently and how completely church leadership was a boys-only club.

The institutions section includes a number of church auxiliaries that are still going relatively strong, including Graceland College (now Graceland University), the Restoration Trail Foundation (now Community of Christ Historic Sites Foundation), and Outreach International. Some, like Resthaven (now “The Groves”), have been spun off and have continued on their own. Others are gone. The “San” (Independence Sanitarium and Hospital) in 1980 had just completed a massive expansion, but it has subsequently been sold off and it was ultimately shut down. My understanding is that the church’s relationship with Park College ended badly, although I’ve never heard the full story. Finally, it’s almost crazy to imagine that as of 1980, Herald House had “nearly one hundred employees.”

For all the changes, one aspect of church culture — very apparent in the booklet — still lingers on today, but should go. When I read through old materials published by the headquarters apparatus of the Reorganized Church of Jesus Christ of Latter Day Saints, more often than not I’m stunned by the degree to which officious language succeeds in purging any potential for passion. This booklet takes that tone to its soulless conclusion. To cite just one example, concerning the new presidency of Wallace B. Smith, we read:

The church enters the decade of the 1980s with a great degree of hope and promise, resulting from the response of the people to the new program model now being brought into being by the First Presidency.

The Korean Central News Agency (the only news agency of the DPRK, i.e. North Korea) couldn’t have reported on the “response of the people” in a more inspirational way!

As we’ve entered the new millennium, I believe there’s still a great degree of hope and promise for the church. But to convey that vision, we need to finally replace the tradition of officious language with words that inspire one another and our community.

46 comments on “Feast Your Soul on This: Church HQ Officiousness”