I would not call my father an ultra-deep religious thinker, at least not openly. He has been a church-going Catholic for over five decades, just like his parents and their parents so on and so forth. Yet even in his quiet devotion, he has come up with some gems over the years. One such pearl of great price is his emphasis on religion and beliefs being personal and determined by the individual first and foremost. That will serve as the basis of this post. However, as a corollary, I think beliefs should involve the input of others, so I encourage comments as a way of stimulating thought and inquiry. 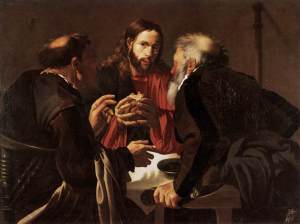 Christianity is, for me, rooted in the present. At the same time, it is also rooted in Jesus of Nazareth. I try not to get caught up in the death of Jesus, because although that has played an important role in much of Christian history, I don’t think it captures the essence of the “Jesus movement.” In contrast to the Stoic resignation which had enabled the socioeconomic and political domination of a small percentage of elites, the message of Jesus was one of nonviolent action. The kingdom of God is a reality for the present, for the here and now. Unlike the Maccabees of a century earlier, the power of the Jesus movement and its ability to last would be based on its inclusiveness, justice, compassion, and focus on living intimately with God in this life, rather than violent revolt which provided only a temporary solution.

While I hold the physical life of Jesus in high esteem, I keep the resurrection just as close to my heart. I choose, however, not to view it as a climax because that connotes finality. I find little satisfaction in viewing the resurrection as an event which took place on a single day, in which the body of Jesus walked out of a grave. I am unable to relate to such an occurrence. Most likely, the disciples fled while Jesus was on the cross, his body was buried amongst other crucifixion victims, and he was left alone. Yet it is that situation that demonstrates the power of the Jesus movement. Most other disciples, when their leader had died, would have abandoned their dream of radical change. The disciples of Jesus however, as days, months, and even years went by, realized that it was more than a man who made the movement. The kingdom was waiting to be unleashed, and the presence of Jesus was inscribed forever on their hearts. The resurrection is much more powerful than a body rising from a grave. It is an experience which can be partaken of even today. The despair the poor, socially marginalized disciples had to overcome is testament to the dying and rising that occurs everyday. Despair is the closest we can come to death, meaninglessness, and emptiness; rather than stoic resignation, the resurrection calls for us to conquer despair. The resurrection is a courage to overcome the forces which bind us in this life. I try to embrace it. That, for me, is the crux of where I find beauty in Christianity.

This powerful experience could only be described in metaphorical, physical language. The stories the Gospel writers used are powerful expressions of the meaning of the resurrection. Perhaps the most common symbol is Jesus as the paschal lamb, sacrificing himself as a ransom for atonement. While this may be one image which has been developed more than others, it is certainly not the only one. However, its meaning extends into the heart of Jewish Christianity in the first century. No longer would the bonds of sin and legalism hold back anyone from the God accessible to all.

A favorite of mine is the story of the disciples on the road to Emmaus. This captures the despair which the disciples must have experienced. Two of them are walking and meet a man (Jesus) whom they do not recognize. They sadly recount all that as happened, but the man encourages them, saying it was all meant to happen. As they eat the disciples recognize the man as Jesus, and he vanishes. It concludes by stating how they recognized him in breaking bread. The meal is integral to Christianity. It represents friendship, openness, and acceptance. Those virtues are representative of the kingdom of God proclaimed by Jesus. Even early in his mission, it is emphasized that Jesus opened up the table to all who desired. This story is at the heart of Christianity, and the call to courage and action manifested in the resurrection.

During this holiday season, I am immensely grateful for my Christian upbringing. I am also thankful that I have been able to explore and, as my dad has said, make my beliefs personal.