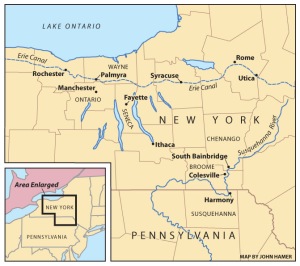 Although our project this year is to carefully read the Book of Mormon in the order of its composition, the earliest portion of Joseph Smith’s gold plates manuscript was lost (and consequently did not make its way into the Book of Mormon when it was published in 1830).

The first phase of the writing began after Joseph and Emma moved to Harmony, Pennsylvania, where her father Isaac Hale set them up with a small house of their own in December of 1828. The composition process was oral: Joseph dictated and Emma wrote down the text. Martin Harris, who was emerging as the chief financier of the project, visited a couple times in early 1829 before relocating to Harmony on April 12 and taking up work as the principal scribe.[1] By the middle of June, a significant portion of the work was complete and Martin convinced Joseph to let him take the working manuscript back to Palmyra, where it was stolen and probably destroyed.

We’ll explore the device of texts within the text in future weeks; suffice to say that that although we’re attempting to read the book in the order it was composed this year, we can’t start with the original beginning because it is lost. However, we do have something else. (If you’re following along in our weekly readings, you’ll already know what that something is.) In July of 1828, Joseph dictated a new text — with Emma once again replacing Martin as scribe. Joseph used the same procedure that he had been employing to dictate the Book of Mormon with the key difference that the plates were not involved at all, even conceptually. The result was an original message of rebuke, but also consolation. (Because of later alterations when the text was published in the Book of Commandments and again when included in the Doctrine and Covenants, I’m quoting here from the text as copied into the “Revelation Book 1” manuscript, transcribed by the Joseph Smith Papers Project.)

Beginning with the assurance that “the works & designs & the Purposes of God cannot be frustrated”, we read: “although a man may have many Revelations & have power to do many Mighty works yet if he boast in his own strength & Sets at naught the councils of God & follows after the dictates of his will & carnal desires he must fall to the Earth & incur the vengence of a Just God”.[2]  However, the warning is probationary: Joseph has messed up, but he’s going to get a second chance:

[B]ehold thou art Joseph & thou wast chosen to do the work of the Lord but because of transgression thou mayest fall but remember God is merciful therefore repent of that which thou hast done & he will only cause thee to be afflicted for a season & thou art still chosen & will & will again be called to the work & except Thou do this thou shalt be delivered up & become as other men & have no more gift[.][3]

In the first several paragraphs, God is referred to in the third person (he, his) and Joseph in the second (you, your, thou, thee, thy) as if the Joseph who is dictating the text is acting as a kind of disembodied narrator to the Joseph who is receiving the message. However, that changes briefly in the final paragraph[4]:

With the phrase “my People the Nephites,” Joseph appears to slip into the prophetic voice for the first time — moving from the indirect discourse of God speaking of his people to the direct discourse of God speaking about “my people” in the first person.[5] (And I say “appear to slip” in because by the end with “his People” and “his name” he has already slipped back out again.) Joseph’s use of the prophet voice (which will build considerably in future revelations) was a restoration or imitation of ancient Israelite prophets, as recorded in the Hebrew Bible, who presumed to speak messages of rebuke, counsel, and hope to people and individuals, invoking God in the first person.

Thus, out of the crisis of the lost text, we have the start of something new: Joseph the seer is now beginning to act as Joseph the prophet. Ultimately, the assertion of direct revelation was probably just as important as the publication of the Book of Mormon for the foundation of the Latter Day Saint movement that followed. But as the first instance illustrates, the history and forms of both are intertwined.

We can note also that in addition to rehearsing some of the contents of the lost text — it was apparently a story about the Nephites, Jacobites, and Josephites who were destroyed because of their iniquities and abominations by the Lamanites, [Lemuelites], and Ishmaelites — we also are told the purpose of the work: to give the “Lamanites” a history that will lead to belief in Jesus Christ and ultimate salvation. We’ll surely talk more about all of the above in the weeks to come.

[2] In the original, the scribe wrote “the words of designs” but crossed out “words of” correcting the text to read “works & designs”. See: http://josephsmithpapers.org/ : the-papers, Revelations and Translations, Manuscript Revlation Books (2), Revelation Book 1, pages 3-4.

[4] This changed when the text was edited. The text in the Book of Commandments read: “Therefore, repent of that which thou has done, and he will only cause thee to be afflicted for a season, and thou are still chosen…” The altered text in the D&C reads: “therefore, repent of that which thou hast done, which is contrary to the commandment which I gave you, and thou art still chosen…” which retroactively introduces God as “I”.

This series is cross-posted on Wheat and Tares.

3 comments on “The Earliest Part of the Book of Mormon”